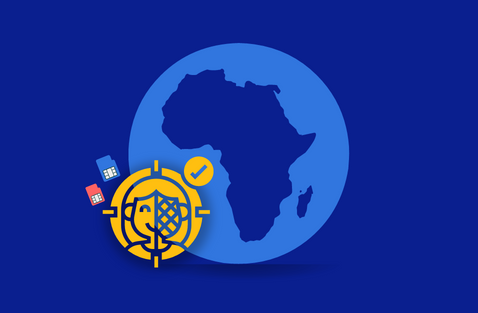 The southern African nations of Lesotho and Namibia have newly begun programs for users to re-register their SIM cards with their biometrics and digital IDs, adding them to the list of newly joined countries adapting to the new norms in Africa.

South Africa is also set to schedule biometric SIM registration, with further plans to push ‘ID4Africa’ as a type of incentive-based identity enrollment approach for governments.

Coming back to the onboarding in Namibia, the SIM card registration program was established in consultation with the Communications Regulatory Authority of Namibia (CRAN), and the country’s Mobile Telecommunications Company (MTC) commencing the registration procedure on a voluntary basis.

According to the MTC, the on-site registrations will be open until January 1, 2023, and will need phone users to carry a few documents including an ID card, passport, new driver’s license or a valid voter’s card as well as the ID proof of address and the mobile. Customers can register directly at any MTC Mobile Home in all 14 regions to ensure that all of its customers have sufficient time to register before it is legally enforced. Because after Jan, it would be a proactive exercise to make sure everyone is registered as envisioned by the regulator Communication Regulatory Authority of Namibia.

MTC Chief Human Capital, Corporate and Marketing Officer, Tim Ekandjo, stated to the general public that a registered card would come with added security advantages; as it helps prevent identity theft, enables identity verification and reduces events of phone-based fraud, as well as aiding in combating cybercrime. Additionally, the inclusion of biometrics is essential given the high rate of fraudulent activities revolving around identity misuse. Digital platforms are also pleased with the evolving digital space in the country, enabling them to identify fraudsters and fortify more systems all over the country.

With the process requiring the capture of biometrics, the registrations were forced to be held in person. The company estimates over two million successful registrations of subscribers in the given timeframe. It was also noted that the Government of Namibia embarked on an awareness-raising campaign as a part of the efforts to curb crime and fight identity fraud and later affirmed plans to make SIM registration compulsory last year. Although the government is advancing on the security front of SIM registrations, some activists have been raising privacy and surveillance concerns about SIM card registration with biometrics, and are cautious about registering. Mostly due to the corrupt personnel being able to trace back on the registered SIMs to uncover personal details of journalists, reports and anyone who’s got a complaint against powerful groups.

Once the new regulation is applied, network operators will be required to store all their customers’ information for at least five years from the date of application, and the Namibian Police or the Namibia Central Intelligence Service need to acquire approval from a judge or magistrate to access the user archives.

The Lesotho Communications Authority (LCA) has announced that the country’s mobile phone users will be required to register their SIM cards with their network service provider. The announcement came after the publication of the Communications (Subscriber Identity Module Registration) Regulations, 2021 in December last year.

The biometric SIM registration onboarding was also inaugurated last month by the Kingdom’s Minister of Communication, Science and Technology, Sam Rapapa. He was seen announcing to citizens that both the telecom providers namely South Africa-based Vodacom and Econet Telecom Lesotho (ETL) in the country have conveyed their support for the program to a successful end and any last-minute rushes to be avoided with an early registration closure.

Here too the requirement for a National Identification card, birth certificate of the child or ID of the person they will be registering on their behalf and a letter showing that they are the legal guardians of such were all required for the SIM re-registration.

Myanmar also held a similar campaign with millions of SIM cards having to be deactivated due to non-compliance with registration requirements. In 2020, more than 34 million SIM cards were suspended in the country due to the owners failing to register using the directed National Registration Card numbers, or for circumstances where numerous SIMs were enlisted under one identity.

The registration, in this case, was adapted to help protect the security of mobile financial services, to contain phone-related criminality and to remove incorrectly registered SIMs from the network. Some authorities have also imposed fines on dodgy SIM deals in the country, such as Vietnamese operators Mobifone, Vietnamobile, Viettel and Vinaphone received a penalty for registering new consumers even with false data. Operators were affected by lower new customer registrations due to SIM registration disconnections.

With countries moving forward with new technologies and mandated biometric installs to their security systems, we at IDcentral help the cause with advanced ID verification and Biometric verification systems. The digital KYX platform from IDcentral is readily available to be white-labelled and launched as branded app (IOS & Android) & web interface for SIM registration with customizations as per telcos need. This could comprise end-to-end services are independent from CSPs’ legacy systems, but use their legacy systems like CRM, billing & network without any impact on IT systems through REST API integrations. This enables an agile approach to a rapidly evolving market. CSPs can become faster, more productive, and more responsive to consumer needs, adapting their service on a day-to-day basis and being present for their consumers at any time

Learn more about our Identity Verification and Customer Onboarding Solutions

Sumanth Kumar is a Digital Marketing Consultant at IDcentral (A Subex Company). With hands-on experience with all of IDcentral’s solutions, he loves to compare and create indispensable digital content.

Your Future in Finance Starts Here.

We Know The Importance Of Delivering The Best Customer Experience.

Get a free Demo

Differentiate the good from the bad. Filter out fraudulent customers before they impact your revenues.